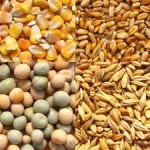 • US stock indexes were mostly higher.

• Boxed beef cuts were higher on light to moderate demand and light offerings. The cutout value for a pork carcass weighing 205 lbs. jumped 1.69c Monday to close at 95.42c a lb. Primal cutout values were sharply higher for loins, butts, hams and bellies and higher for ribs. Cutout values were lower for picnics.

• Corn, soybean and soybean meal futures rose Monday on possible harvest delays because of rainfall in the Midwest. Wheat futures lost ground on favorable weather in the US southern plains and ideas that the Argentinian crop could be larger than forecast.

• Major US stock indexes were mixed and little changed Monday as the market turned its attention to earnings reports as well as key employment data due later this week. The Dow Jones Industrial Average fell more than 7 points, closing at 15,392.20. The Standard & Poor’s 500 Index was steady, closing at 1,744. The Nasdaq Composite Index gained almost 6 points, closing at 3,920.05.

• The value of the US dollar against the euro was higher Monday.

• Gold futures rose modestly Monday on sentiment that the Federal Reserve will delaying tapering its stimulative monetary policy. The October contract gained $1.30, closing at $1,315.70 an oz.