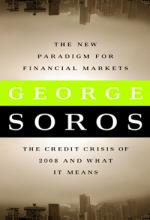 We are in the midst of the worst financial crisis since the 1930s. To be sure, it is not the prelude to another the Great Depression. History does not repeat itself. The banking system will not be allowed to collapse as it did in 1932 exactly because its colapse then caused the Great Depression. At the same time, the current crisis is not comparable to the periodic crises which have afflicted particular segments of the financial system since the 1980s -the international banking crisis of 1982, the savings and loan crisis of 1986, the portfolio insurance debacle of 1987, the failure of Kidder Peabody in 1994, the emerging market crisis of 1997, the failure of Long Term Capital Management in 1998, the technology bubble of 2000. The periodic crisis were part of a larger boom-bust process, the current crises is the culmination of a super-boom that has lasted for more than twenty-five years. This crisis is not confined to a particular firm or a particular segment of the financial system; it has brought the entire system to the brink of a breakdown, and it is being contained only with the greatest difficulty. This will have far-reaching consequences. It is not business as usual but the end of an era.

This somewhat bombastic statement (as it is defined by its author) was made by the philantropist and financer George Soros in his book The New Paradigm for Financial Markets. The Credit Crisis of 2008 and What It Means.  He also points out that the current situation cannot be understood without taking into account the economic strength of China, India and some oil and raw material-producing countries and even the commodities boom.

We will consider this last point and how it affects to livestock producers.

In 2010, the prices of raw materials such as barley, corn and wheat  increased, respectivelly, by 63%, 84% and 41%  as well as soyabean price that has gone up by 25% in the same period. This is due to hedge funds and market speculation as the housing bubble  have caused that real estate investment trusts  abandoned this segment of the market and currently, they focus on raw materials.

Many pig producers have dissapeared due to expensive feedstuffs and financial crisis and  there will dissapear  more producers if the EU authorities do not implement new measures to reduce feed costs and to increase the prices they get for the sale of their animals. To reduce feedstuff costs: tender adjudication of EU cereal intervention stocks for the EU domestic market, EU grain export should be restricted temporally, decrease in import tariff quotas at zero duty for cereals from third countries, reintroduction of animal protein in feedstuffs for the livestock sector of pigs and poultry, investment funds must deposit 70% of the purchase value for raw materials. To increase the prices the livestock producers get for the sale of their animals: granting for private storage of pigmeat sector -it has been made currently-, the introduction of refunds for exports to third countries.

All this situation demonstrates that new bubbles are already in formation: a boom in raw materials and energy.  Soros foresees a period of political and financial instability, hopefully to be followed by the emergence of a new world order.

Sources: Soros, George. The New Paradigm for Financial Markets. The Credit Crisis of 2008 and What It Means. PubblicAffairs, 2008.