Worldwide meat consumption is projected to double in the coming 40 years (source WHO).  Current stem cell technology and skeletal muscle cell biology present opportunities to grow meat in a laboratory “ex vivo” environment with a higher efficiency of converting basic nutrients into edible animal proteins. Already, we are capable of growing pieces of tissue that consist primarily of skeletal muscle from porcine stem cells, derived from muscle biopsies.

A hamburger created from stem cells, priced at €250,000 euros (about $330,000), may be unveiled as early as October, said Maastricht University scientist Mark Post, who is developing the burger in his labs. At the American Association for the Advancement of Science (AAAS)’s annual conference in Vancouver, he has  provided a proof of concept , showing that out of stem cells you can produce a product that looks like and feels like and hopefully tastes like meat.

Post‘s approach uses stem cells, gradually transforming them into tissues that resemble the skeletal muscle that makes up steak or hamburger.
At the moment, Post’s lab has created small strips of this tissue.  Finally, 3,000 strips of the lab-grown meat measuring 3cm by 1.5cm by 0.5cm are minced  along with 200 pieces of lab-grown animal fat, formed  into a burger. The process is still lengthy: 6 weeks to produce the meat.

First, the stem cells are stripped from the cow’s muscle. Next, they are incubated in a nutrient broth until they multiply many times over, creating a sticky tissue with the consistency of an undercooked egg.

The original plan was to develop a sausage, Post said, but with all the fillers in a typical  recipe, “it was hardly recognizable as a meat product.” 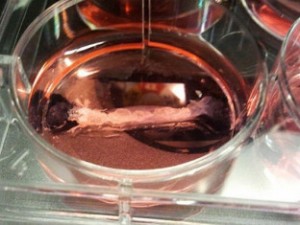 The stem cell’s extraordinary ability to grow and multiply means that a cells taken from a single cow could produce a million times more burgers than if the animal was slaughtered for meat. It will be at least ten years before the artificial meat is produced on an industrial scale and has satisfied the safety testing necessary for it be placed on supermarket shelves.