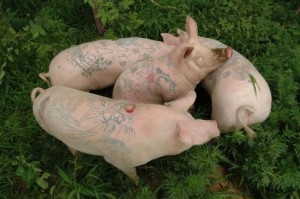 Scientists are reporting that the mucus lining the stomachs of pigs could be a long-sought, abundant source of “mucins” being considered for use as broad-spectrum anti-viral agents to supplement baby formula and for use in personal hygiene and other consumer products to protect against a range of viral infections.

According to the report that appears in ACS’ journal Biomacromolecules, Katharina Ribbeck, of MIT, and colleagues point out that mucus, which coats the inside of the nose and mouth is the immune system’s first line of defense. The slimy secretion traps disease-causing microbes, ranging from influenza virus to HIV (which causes AIDS) before they can cause infection. 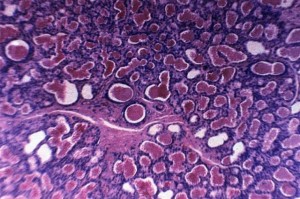 That has led to consideration of mucin, the main component of mucus, for use as an anti-viral agent in a variety of products. However, existing sources of mucins, such as breast milk, cannot provide industrial-sized quantities. Large amounts of mucus exist in the lining of pigs’ stomachs, and the authors set out to determine if pig mucus — already used as a component of artificial saliva to treat patients with “dry mouth,” or xerostomia — has the same anti-viral activity.

They found that pig mucus is effective at blocking a range of viruses, from strains of influenza to the human papilloma virus, which is associated with cervical and oral cancer. They report that pig mucins could be added to toothpastes, mouthwashes, wound ointments and genital lubricants to protect against viral infections. “We envision porcine gastric mucins to be promising antiviral components for future biomedical applications”.