EU agricultural markets are strongly affected by the macroeconomic outlook. The overall EU meat market in 2010 was characterised by an increase in production (2.4%) and a recovery in EU net trade position. Production continues to increase in 2011, but is expected to decrease slightly, by -0.3% in 2012. Overall EU meat consumption in 2012 is likely to remain at the level of 2010.

The unemployment at world level would stay at around 8% showing a slightly declining trend. World inflation is expected to remain moderate during the outlook period, at 4% in 2011 and at 3% in 2012. In 2011 most currencies are expected to appreciate further against the US Dollar, Argentina and Ukraine being among the important countries (relevant both in terms of EU import and export potential) to have their currencies depreciated against the US Dollar by -5% and a slight -0.4%, respectively. In 2012, the Argentinean peso (-6%), Australian dollar (-3%) and Brazilian real (-4%) are expected to depreciate while the Chinese renminbi to appreciate by 6% against the US Dollar. The price of crude oil2 is expected to increase in 2011 to around 102 USD/barrel (+35% against 2010) and to 107 USD/barrel in 2012.

The overall EU meat market in 2010 was characterised by an increase in production (2.4%) and a recovery in EU net trade position. Production is expected to decrease slightly, by -0.3% in 2012. Overall EU meat consumption in 2012 is likely to remain at the level of 2010, driven by the economic situation.

Production related uncertainties would mainly originate from rising production and investment costs and their financing, from a limited sectoral adjustment capacity with respect to market volatility, and from animal health related issues. Prices for energy and protein feed components and other essential feed ingredients have been increasing since 2010 and are expected to remain at elevated levels. 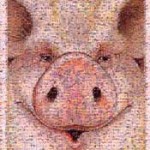 The pig meat sector is facing a critical time since the autumn of 2010 due to the surge in feed prices, which has severely affected profitability. Aid for private storage was introduced for a period of three weeks in February 2011 to stabilise the pig market when the already difficult market situation worsened by a dioxin incident in Germany. For 2011, production is expected to grow slowly (+1.7%) and then to remain stable in 2012. According to the available trade data until the end of August 2011, meat exports could exceed 2010 volumes by 13.4%. In particular exports to South Korea and China/Hong Kong performed very well, increasingly also in the area of higher value cuts. However, pigmeat exports may fall slightly in 2012 (by 4.3%). EU pigmeat imports are expected to decrease further, with -30.5% and -24% in 2011 and 2012 than in 2010. From 2010 onwards, consumption of pigmeat (absolute and per capita) will increase slightly by 0.6% in 2011 and by 0.5% in 2012.