The use of intact adult males is a highly beneficial alternative for producers as they achieve better efficiency than barrows. They have a higher average daily food, better conversion efficiency, lower feedstuff consumption and produce meat with higher lean percentage. 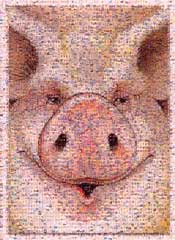 The castration is done primarily ,aside consumer tastes, to facilitate handling of animals and to allow mixed-sex breeding. To minimize stress, it must be done before 2 weeks of life primarily due to easier hadling and healed the wound. The use of boars for meat production varies greatly between countries. For example, in Britain, Ireland and Spain intact adult males account for 90% of slaughtered animals and in other countries they are not more than 1%.

As usual method of castration in Spain, the vast majority of veterinarians prefer to castrate the animal before the seven days of life (91%). The use of anesthesia and analgesia is a minority, as well as other methods for castration of piglets.

There are doubts about the future of castration. Veterinary professionals believe that it will be diminished its practice, and that it eventually will disappear and will be replaced by other alternatives.

The main European associations of animal welfare, as Eurogroup for Animals Welfare and the Royal Society for the Prevention of Cruelty to Animals (RSPCA), have agreed on the use of chemical castration in pigs, which is essential to avoid the taint in pork, as a better alternative to physical castration of animals. According to the data handled by Eurogroup, in Europe about 100 million male pigs are castrated annually, “most times, they say, a surgical procedure without anesthesia, which causes pain and distress to the animals.”

Boar taint is an offensive odour which is released from pork when it is cooked. More information in Boar Taint: An Understanding of What It is