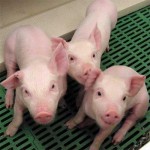 According to the US Department of Agriculture’s World Agricultural Supply and Demand Estimates (WASDE), higher feed prices due to cereal decrease in 2012 are forecasted to slow livestock production.

USDA reduced pork production forecasts  from July with the expectation that rising feed costs will pressure the pace of pork  expansion and temper growth in weights.

A stronger US dollar which will help support imports from Oceania. Strong pork exports in April support an increase in the 2012 forecast, according to WASDE.

Pork imports are unchanged. Pork trade forecasts for 2013 are unchanged from July, but USDA raised its forecast for broiler exports on expectations of continued strong demand.

Hut hog prices are expected to increase. For 2013, the cattle price is unchanged, however hog, broiler, and turkey prices are forecast higher from July on tighter supplies.