The Duroc breed of hogs had its origin in the eastern United States and in the Corn Belt.

In 1837 Henry Clay imported four red shoats from Spain for his farm at Ashland, Kentucky. Daniel Webster imported similar hogs from Spain or Portugal in 1852 for his farm in Massachusetts, but Mr. Webster died soon afterward, and the hogs passed to the ownership of his relatives and were scattered into several states. The exact distribution of these importations and others that were probably made is not known, so it cannot be accurately stated just what part any of these hogs may have played in the formation of the Duroc breed.

The strain of hogs that later became known as the Jersey Reds was well established in New Jersey prior to 1850. 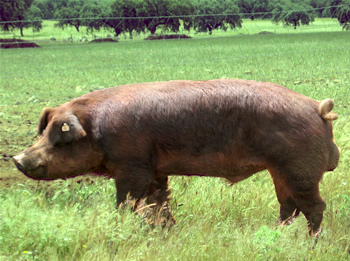 These hogs were referred to as “red hogs” for many years and gained an enviable reputation because of their extreme size, rugged constitutions, and prolificacy. They were a variety of hogs that lacked in quality, being very coarse in the hair coat and bone, and were long and rangy. The hogs reached an enormous size at maturity, gained an enviable reputation for the very heavy weight that they attained, and were favorably accepted at the near-by markets. The name Jersey Reds was first attached to the hogs in the New Jersey area by Joseph B. Lyman, Agricultural Editor of the New York Tribune, who resided in New Jersey. Shortly after he coined the name, a Mr. Lippincott used the name in advertising his hogs, and from that time on the name of Jersey Red stayed with the red hogs of that area.

The Duroc Strain. The Duroc strain of hogs was started in Saratoga County, New York, by Isaac Frink who lived near Milton. He secured his first hogs in 1823 from Harry Kelsey, who had moved to Florida, Montgomery County, New York, in 1822. Mr. Kelsey was standing the famous Thoroughbred stallion Duroc, and Mr. Frink visited the Kelsey farm to see the horse. While at the Kelsey homestead he spied some red pigs that very much took his fancy, and he purchased some of them and took them home. Since the pigs had no breed name, he called them Durocs in honor of the stallion. Mr. Kelsey was said to have told Mr. Frink that the hogs had been imported, but just how many generations had elapsed since the importation, or whence the hogs had come, was never established. The Duroc hogs were of smaller size and more compact, but had greater quality and aptitude to take on fleshing at an early age than did the Jersey Reds.

About 1830, William Ensign of Stillwater, Saratoga County, New York, secured a pair of red pigs in Connecticut that crossed very well with the strain that Mr. Frink had developed. Most of the red hogs in Connecticut at that time were said to have been of the Red Berkshire strain that had come to Long Island about 1820. The Duroc breeders were progressive, and in 1877 breeders from Saratoga and Washington counties, New York, met and decided on a scale of points for their breed of swine. While the Durocs of that day are said to have been smaller than the Jersey Reds, they were extremely heavy compared to what we think of as modern market hogs.

Durocs have considerable variation in color. An acceptable color may range from a very light golden, almost yellow color, to a very dark red that approaches mahogany. The red is a very practical color that suits pork producers, and since it is a solid color there is not concern about fancy points of proper markings. Durocs have a medium length and slight dish of the face. The ears should be drooping and should not be held erect.