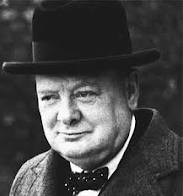 Winston Churchill, who was one of modern history´s great trenchermen, wrote at the turn of the 20th century. “It is well to remember that the stomach governs the world”.

The book examines ten dinners during Churchill’s Prime Ministerial career and demonstrates how he used mealtimes as political weapons. From strategically thought-out seating arrangements to meticulously planned menus – or ‘bills of fare’ as they were then known – Churchill’s dazzling skill as a host is vividly described.

With brilliant detail, Stelzer describes the favourite foods of the leaders of the time, (Churchill was partial to grouse and ice cream); the settings in which they were consumed (be it elaborate dining rooms or train carriages); and the political manoeuvres that were made, with chapters on eight diplomatic meals from Newfoundland to Potsdam.

Over a succession of dinners and lunches Churchill firmed up Roosevelt’s support for the ‘Europe First’ strategy which would eventually win the war: Visiting the White House at the end of 1941 -almost incredibly, he stayed for three weeks – Churchill was taken aback to be served sauerkraut and pigs’ knuckles by Roosevelt’s abysmal housekeeper, generally considered the worst in presidential history. He made up for it at breakfast, scoffing vast quantities of bacon and eggs, often washed down with spirits.

He forged a relationship with a reluctant Stalin in Moscow over an intimate meal featuring the head of a suckling pig: Visiting Stalin in Moscow a few months later, he put away sturgeon in champagne, suckling lamb, turkey, chicken and partridge. Stalin’s appetite was equally impressive. “He offered me the head of a pig,” Churchill recalled. “With a knife he cleaned out the head … He then cut pieces of flesh from the cheeks of the pig and ate them with his fingers.”

He also dazzled by providing a seven course meal complete with the Royal Air Force String Orchestra flown to Potsdam at a day’s notice. And yet, whilst conscious of the occasion and his guests, Stelzer shows Churchill’s deep seated concern for his countrymen: He was always mindful that he was leading a nation surviving on rations.

Crucially, Stelzer uses her subject to demolish the arguments of those who have accused Churchill of chronic alcoholism. Instead, she portrays a Prime Minister who knew how food in diplomacy could be a lubricant and a man who was deemed a perfect host. 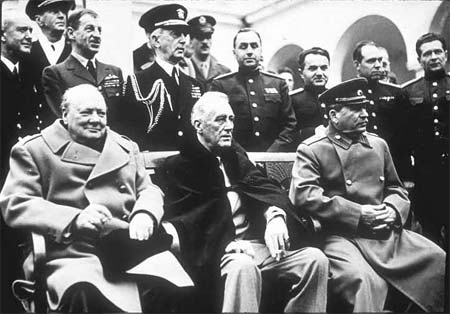 The Yalta Conference, 1945. Churchill, Roosevelt and Stalin. The begining of the Cold War.