The Knacki Herta brand by Nestle is stamped as halal, which is to say that it is fit for consumption according to the principles of Islam. Are they really? 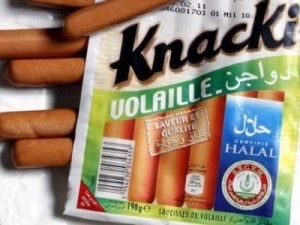 This is a question that stirred Muslim consumers’ interest since Jan. 14, when an analysis report, conducted by the laboratory Eurofins Nantes, demonstrated the presence of traces of pork in these sausages that are supposed to be composed solely of poultry meat.

“The presence of DNA of the target species detected is pork,” concludes the report, originally commissioned by the Forum of Muslim consumers, Halal Debat.

Nestlé group, which owns the trademark Herta, sought to reassure the global Muslim consumers. “Our products comply with the procedures required by the Paris Mosque, which are validated by it, and checked on site by four permanent controllers recognized and approved by the same religious authorities,” says a statement by the food giant.

Nestle offered another lab analysis to prove their point: “This analysis, which was conducted by an independent laboratory in Germany, Genetic ID, based upon detection limits stricter than those used by Eurofins, confirms the absence of traces of DNA from pigs in the affected products.”

Eurofins, in turn, also confirmed the results of its analysis. On Tuesday night, Nestle finally announced the suspension of production of halal sausages Herta.

“We decided to do DNA tests but these tests systematically lengthen delivery times. So, we are suspending production in France for the time being until we find a new organization (to certify us),” said a Reuters spokesman for Nestle France.

French retailer Casino acted immediately. The distributor removed all Herta sausages from its shelves and suspended all supplies of the products. Casino told the AFP it will run in parallel pending “further independent studies to ensure the strictest compliance with the halal certification.”

Already the French group Synergy Muslim Professionals (SPMF) is planning to take legal actions. Indeed, for SPMF and other Muslim associations, it is mostly the “laxity” of the Great Mosque of Paris which certified the product is to be blamed.

“With the analysis by Eurofins, you are sure that Knacki Herta which is said to be halal is actually haram; that is to say that it is unfit for Muslim consumption,” said Fateh Kimouche, editor of the blog Al-Kanz.

“Regardless, these are the details which the certification bodies have to scrutinize including the ingredients used in the manufacture of halal products,” he added. It (Great Mosque) covers 40% of the halal market in France, yet its inspectors are regularly criticized, both for their number and for their qualifications. It might be time for a little clarity in the field,” said Fateh Kimouche.