Ukraine will go for an enormous beer-loving pig to predict the outcome of football matches at the upcoming European Championships, from 8 June until 1 July in Poland and Ukraine.
Ukraine – where slices of hog fat are the national dish – introduced ‘Psychic Pig’, a two-year old hog.

Kiev’s city government said it would wheel out the porky tipster to give daily forecasts at 4 pm once the tournament kicks off next month. 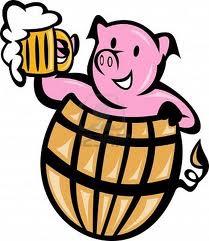 The pig is known to like beer and fries and grunts when he watches matches on television with his farmer owner. He still needs some PR training before he is presented to the public.

“We want to make sure he is calm – we don’t want him to get scared,” said Svitlana Bovkun, a spokeswoman for Kiev city administration.

Due to protective media handlers, it is not known how the Psychic Pig will know the outcome of the matches. But if the allegedly intuitive hog can overcome his shyness he will be brought to a specially-built house in central Kiev outside the Olympic Stadium, where some of the Euro 2012 matches will be played.

Ahead of each game, he will be asked to indicate the winner by deciding whether to eat from one of two plates of food, each marked with the national flags of the teams playing.

Paul
The idea of introducing animals to predict football matches stems from the World Cup 2010. Paul the Octopus, from Oberhausen’s Sea Life Centre, Germany, gained world fame by predicting eight matches correctly, including Germany’s run to the semifinals and Spain’s victory over the Netherlands in the final. Paul made his predictions by opening the lid of one of two clear plastic boxes, each containing a mussel and bearing a team flag. He died at an aquarium in Germany later that year.

Not surprisingly, also this year’s co-organiser Poland introduced a psychic animal – the Polish settled for a clairvoyant elephant in Krakow Zoo.  She picked Chelsea to win the Champion’s League last week.

The Psychic Pig is not the first apparent telepathic porcine. In 2010, a red river hog called Apelsin, in Tallinn Zoo, Estonia, picked the Netherlands to win the World Cup final…