A 64-year-old tub of American lard has been deemed fit for human consumption by food safety authorities in the eastern German state of Mecklenburg-Western Pomerania. 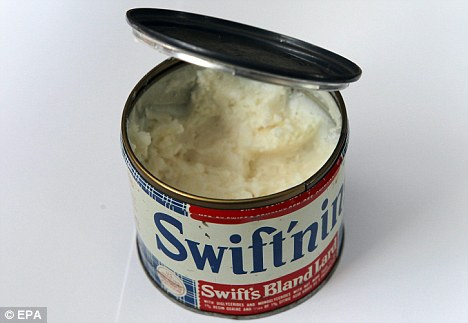 Slaves to the sell-by date, take note: While some foods really do need throwing away, others will keep for almost a lifetime.

Food safety agents in Germany have declared a 64-year-old tub of lard kept by a pensioner to be ‘fit for human consumption’, despite the fact that it dates from before the Second World War.

Hans Feldmeier, 87, received the pig fat in 1948 while he was a student near Rostock in northern Germany, as part of the post-war US aid programme.

Millions of tins of “Swift’s Bland Lard” – a pig fat which was used as a spread similar to butter or as a cooking fat – were distributed by US soldiers to West Germans after World War II in care packages that included other essentials like powdered milk, cheese and sugar.

Some of those made their way to communist East Germany, including one to Hans Feldmeier, a pharmacist from the Baltic Sea town of Warnemünde who never opened the can.
Worried that the lard had passed its expiration date, the 87-year-old recently decided to turn it over to the state for a comprehensive inspection.
The response was surprisingly positive.
“Overall, the product has a degree of freshness and material composition necessary to be assessed to be satisfactory after 64 years,” according to the State Office for Agricultural, Fisheries and Food Security.
The authorities did, however, find minor deficiencies in the lard’s smell and taste, discovering that it was slightly gritty and appeared old, meaning it could not compete with the quality of a fresh sample. Still, it appeared to be fit for human consumption, they said.
The office credited the air-tight US can and preservatives for maintaining the lard in such pristine condition over the years.
Feldmeier promptly asked for his tin of lard back, calling it “beautiful” and saying he couldn’t imagine parting with it.

So the authorities sent it back to him – empty.