Back in the  the early 90s,  UK magazine The Face was the coolest thing on the planet. In this magazine, Eva Herzigova was photographed as a butcher. Eva Herzigova,  blood-smeared, washed out and holding a lump of bloody mince meat. 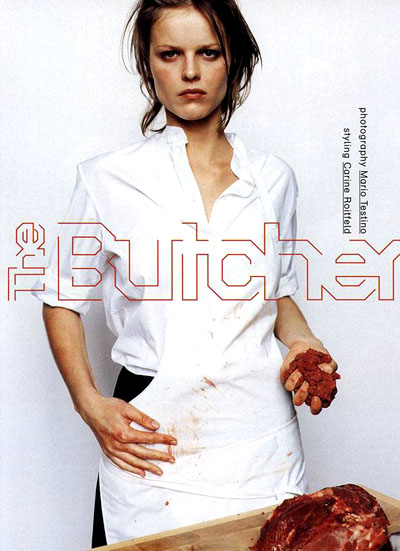 A hilarious shoot, which cast supermodel Eva Herzigova as a maniacal butcher in a blood-spattered apron playing with pieces of raw meat, also drew flak, particularly the image of her caressing the blade of her meat cleaver.

These  images were created for a Mario Testino portfolio in collaboration with Carine Roitfeld  in The Face  magazine circa 1997. 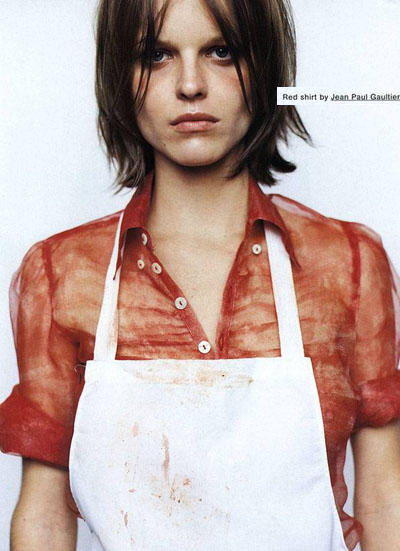 One of the coolest magazines to come out of the UK, The Face was launched by Nick Logan in May 1980, and last published in May 2004. Legendary as an arbiter of taste in pop culture and particularly fashion, The Face was a natural stage for the vision of Roitfeld and Testino which was especially raw during this period — literally at times.

When asked which of her editorials was most compelling, Carine named “The Butcher” with Eva Herzigova for the humor: “I had a very good period where I was working at French Glamour and I was working for The Face. The ‘butcher’ shoot with Eva Herzigova and those sort of stories. They’re memorable stories, and you say why? Maybe because it’s not just about fashion. It’s because it’s a moment of the time.” She elaborated in an interview with Self Service:

Ezra [Self Service]: Your early collaborations with Mario Testino were quite provocative in a certain way! 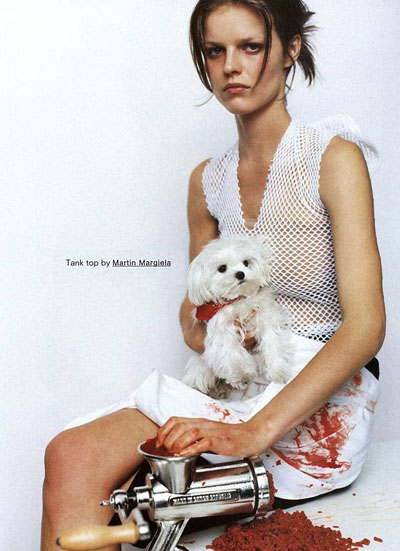 Carine: I think that in the beginning of my love duo with Mario, we did a few series that really disturbed people.

Ezra: Such as some of the stories you did with him in The Face?

Carine: Yes, for example, and I think that we had a lot of humor. We were talking about the problem of the moment, which was mad cow disease.

Ezra: And the other one on royalty.

Carine: I think you need humor, there is not a lot of it in photos, and it’s very hard to put humor in photos. In any of Rotfield’s issues of  Vogue Paris it can be seen  she still makes subversive choices. And under her editorship, Vogue Paris has become a space where she and her collaborators (Emmanuelle Alt, Juergen Teller, Mario Testino, Terry Richardson) examine the cult of celebrity, art, stereotypes, glamour, scandal, dignity and infamy.

‘I have more fun doing my magazine. We French, we small! We can smoke on the cover, we can show flesh, we can do crazy calendar; we have a lot of freedom that they don’t have in America.  I would be very frustrated not to be able to do all my craziness that I’m able to do here in France.’

* “No one can be wise on an empty stomach” written by George Eliot,  the pseudonym of novelist, translator, and religious writer Mary Ann Evans (1819-1880).