The Gascon is a rare breed of domestic pig which has survived in the more mountainous and remote regions of France. In the Midi-Pyrénées region, the Gascon survives as probably the most ancient breed of pig in France. 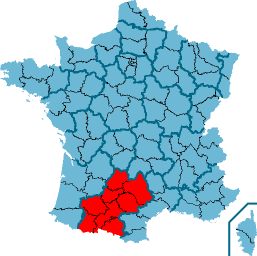 Despite its endangered status, it has many valuable characteristics. Like most old-fashioned breeds, it is prone to becoming very fat, but it is vigorous, hardy, thrifty and tolerant of hot climates. The sows are prolific and have a good supply of milk for their litter

The local rare breed around here is the Gascon or to use its Heritage name the Noir de Bigorre. The Gascon Noir is the oldest pig breed in France, closely related to its Iberian cousin. When Centurions were roaming the French countryside the geographer Strabo, praised the quality of black pigs, claiming “they were the best of the Empire.” After the arrival of modern intensive farming, their numbers fell dramatically after the World War I to only a few hundred in the late 1970s.

The Gascon is a very hardy, slow-growing breed fabled for its dark marbled meat and ability to live outdoors year round. On its very rounded form, the Gascon has a black skin covered in thick wiry black hair, thicker along the back and often finished in a swirl on the rump. It has a pointed face and heavy lop ears. Some producers leave their pigs roam in oak, beech and chestnut woodland and are not fitted with nose rings to stop them digging. What they find naturally in the form of roots, leaves, acorns, chestnuts, bark and bugs is supplemented with feedstuffs. The piglets are kept with their mother for up to 3 months giving them the best possible start. These pigs are slaughtered at between 9 and 18 months to obtain a carcass weight of 60 to 120kg.

Thirty nine Gascon pigs were reared in an outdoors system in two swine farms of the Tarn et Garonne with two complete mixed diets till 14 months (10 to 16 months). During the fattening, the live weight and the thickness of the back fat were controlled. The daily gain was reduced and variable (383 g +/- 90) and the feed efficiency was low (feed conversion 6,4).

After slaughter the carcasses characteristics were recorded (weight of the hot carcass, back fat thickness, muscle percentage). The carcasses show a high back fat and a low muscle percentage. These first data show that this local breed takes place between the Celtic breeds (with high lean in the carcass and a fast growth) and the Iberian breeds with more fat.